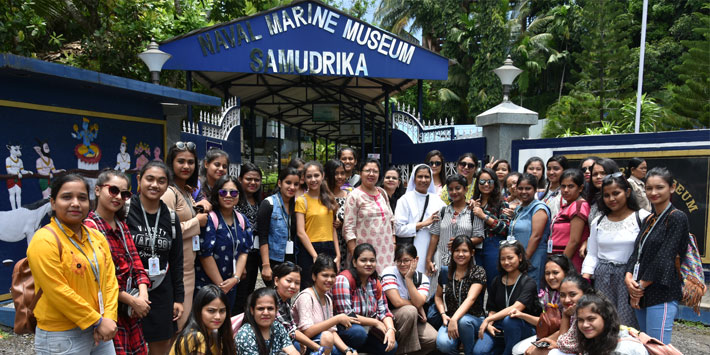 Andaman- a land of corals; a place of exquisite beauty where one can see the beauty of Nature at full play and we at St. Mary’s Higher Secondary School, Guwahati  planned for an educational trip to this beauteous island for the class XII students. An educational trip is a fun filled opportunity for students to come out of their classrooms and have a real-life learning experience. As such after much considerations and planning, we arranged for a 5 day academic tour to the Andaman Islands from 18th-22nd August 2019 of a group of 41 members i.e. the Principal, two teachers, 36 students, the team manager and his companion.

The bright day of the 18th of August 2019 saw the excitement and hopes of 41 souls at play as all of us anticipated this much awaited trip. A trip from Assam to Andaman, across mountains and the sea. The trip started off fair and well, as we boarded the aircraft which took us to our first stop of this trip- Kolkata. An overnight stay with good food and lodging charged all of us sufficiently as we proceeded for the rest of the trip on 19th August at 4 in the morning. We took pleasure when we saw our elaborate and prolonged planning take actual shape as we boarded our flight to our main destination i.e. Andaman.

As the sight of the Veer Savarkar International Airport drew close, all the students were bubbling with joy at the thought of the events and fun that awaited them. We got down from the aircraft and proceeded towards our hotel which was a comfortable arrangement completely suited to our likes. After allotting the students to their respective rooms, we proceeded for breakfast after which the tour of the day began.

Bundling ourselves on the tour vehicles, the trip started with our first visit being to the Samudrika Naval Marine Museum which is run by the Indian Navy. Located at Port Blair, this popular museum has a wide range of installations with informative coverage of the island’s ecosystem, plants, animals, tribal communities and marine life. This museum also includes a small aquarium that houses various collections of fishes with the coral room being a sight to behold. We also came across the skeleton of a blue whale that was washed ashore. From there, we proceeded towards the Anthropological Museum where there were extensive details about the geographical location, topography, climate and culture of the land as well as about the Aboriginals with a model house depicting how they live and their equipments were kept. Then we moved towards the main significant location of the island; the colonial prison whose name is significant with that of the island– the Cellular Jail. Initially known as Kala Pani, the remote island was considered to be a suitable place to punish the Indian freedom fighters and life prisoners. The prisoners lived in extremely harsh conditions with inhumane treatment meted out to them. The dingy conditions of the cells, the prison dress and chains and a walk through the corridors was enough to send a chill down the spine as the thought of the brutality against the prisoners come to mind.

A quick trip was taken back to the hotel for lunch as the best part of the day awaited, being the Corbyn Cove Beach. An hour and half was spent which was filled with laughter and fun where the students enjoyed to their hearts content. After freshening up, we again proceeded to the Cellular Jail for the Light and Sound Show which is aimed at telling the whole information about India’s Heroic Freedom Struggle and the story of the history at Cellular Jail. This show of 45 minutes brings to light the saga of miseries and pain which is brought alive inside the jail compound. The entire show brings up the dark history of the islands and reminds us why these beautiful islands were once called Kala Pani (black water). After the show, we went back to the hotel where all of us flopped down on our beds after dinner.

The day of 20th August held trips to few other islands near Andaman, each a unique attraction on their own. After breakfast, we started out to the Rajiv Gandhi Water Sports’ Complex which is the main pathway to go to the islands. We boarded the boat, tightened our life jackets and proceeded towards the Ross Island, now officially renamed as the Netaji Subhash Chandra Bose Island. Named after Captain Daniel Ross, the island was a colonial base and is a primary tourist attraction because of its historic ruins which include the Chief Commissioner’s House, swimming pool, water treatment plant, church and cemetery. It was drizzling all throughout but it did not douse the energy of the students and we moved towards the next island being the North Bay Island. This island is an important place to visit since the lighthouse seen at the back of a 20 Rupee Indian note is from the North Bay Island. At the island, a number of water activities are offered like scuba diving, snorkeling and glass boat rides since this island is the main place from where we can view the magnificent coral reefs that Andaman is famous for. We opted for the 45 minutes Dolphin Glass boat ride and it was an enthralling experience to be able to see the corals and the marine life it holds from such close quarters. Soon afterwards, we returned back to the hotel for lunch and some rest. The evening saw a short trip to the market place and we retired early to the bed as the events of  following day was to start at 3:30 in the morning and it required tremendous energy.

21th August started at 3:30 a.m. as we had to proceed to the highly guarded and restricted area of the Aboriginals of the Andaman Islands known as the Jarwas. The entry into the area is permitted at specific times as the vehicles are allowed to pass through with heavy security accompanying them. We reached in time for the first entry at 6 a.m. We made our way through 50 kilometers of thick forest area in an extremely rainy weather and the exit came up to a jetty from where we had to take a streamer to go across the water. The streamer took us to the other bank for our visit to the natural Limestone cave. We divided ourselves into groups of ten to fit in the boats which took us to the cave. The half hour long trip was enthralling as we went through storms and strong winds. We reached the cave through mangrove creeks, all drenched and the students had a long walk ahead of them, from the entrance till the cave. The walk was very tiresome as it was raining, the path being muddy and slippery but the sight that it led us too was worth the trek. The limestone cave with all its different types and forms was a beautiful manifesto of Nature’s beauty and ability. And then we walked back the same way again to where the boats were which took us to the jetty. Upon reaching there, we were taken to see the Mud Volcano by road which erupted in around 2005 and is a natural physical feature of the island. We had our lunch there and proceeded back to the main jetty on a streamer. We again had to go though the restricted area and on our way back we spotted several Jarwas. Around 7,we reached the hotel extremely tired, but glad that we had a fulfilling trip. And on 22st August we got up bright and clear for our homeward journey. Bidding farewell to the hotel employees for their hospitality and boarded our flight back to Kolkata and from there to Guwahati which we reached at 4 p.m.

The Island with its cleanliness, fresh, pollution-free air and daintiness makes it an instant appeal. The climate of Andaman is warm, humid and it was raining almost throughout the day. Though the sightseeing depends on weather conditions but our trip went undisturbed with the climate favoring us constantly. Thus, this trip to the picturesque Andaman Islands with its beaches, scenic beauty, weather and history was very experiencing, promising and memorable.

Witnessing and dynamic communities, living the primacy of God and journeying the path of holiness in the Church together with the young and the educating community in docility to the Holy spirit under the guidance of Mary, giving a creative response to the cry of the poor and marginalized in the spirit of Don Bosco and Mother Mazzarello

To walk in the footsteps of Don Bosco and Mother Mazzarello, becoming signs and bearers of God's foreseeing love for the young, the poor and the marginalized. 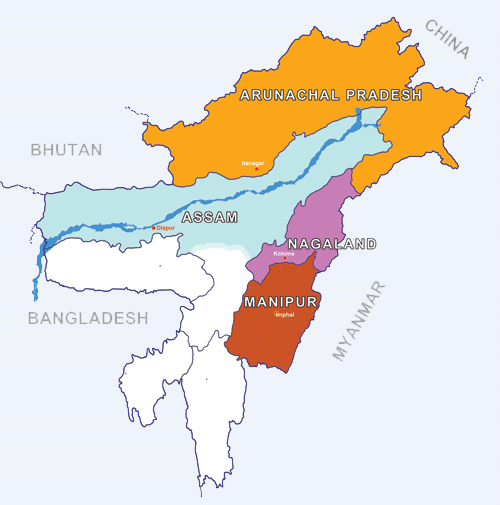